In memory of great names and unique achievements, the RETIRED NUMBERS are no longer awarded and immortalized as a sign of appreciation with a flag under the stadium roof. In order for a player number to no longer be assigned, 4 of the following five criteria must be met.

The following player numbers are no longer assigned at the EVZ:

The dangerous wing-forward scored 222 goals for EVZ in 546 games. The former EVZ junior spent two years at HC Davos (1986-88) and got into the Swiss team for which he played 51 international games. Between  2001 and 2004 the long-time captain was sport manager for EVZ. 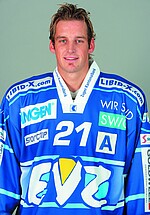 The international player (capped 181 times) was an EVZ Junior and became champion with Lugano (1999) and Davos (2002) but is still an EVZ legend. He came back to EVZ at the same time as Sean Simpson (from Hamburg) in 2003, was twice top-scorer and was the first EVZ player to have made it into the NHL (Phoenix Coyotes, 2006) and the KHL (St, Petersburg, 2007). He started his second career as NLA head coach at HC Lugano. 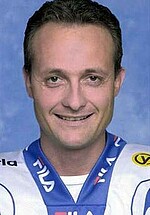 The long-time national defender came from Bern to Zug in 1990 and was one of the leading figures in the EVZ defence for over a decade. After his first title with SC Bern in 1989, he won the championship for the second time with EVZ in 1998. In 2001 he had to resign from active sports because of chronic complaints.

Wall of Fame
Milestones
Your web browser ist outdated.
The web browser you are using is no longer supported.
Please download one of these free and up to date browsers.
Why should I use an up to date web browser?